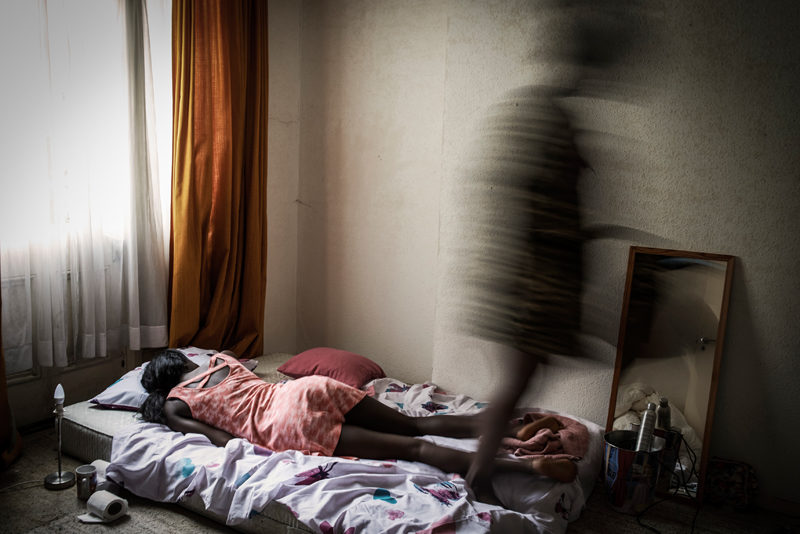 Rory Carnegie is an established photographer whose documentary work primarily focuses on social issues, alongside a more conceptual practice that considers the subject of interconnectedness. His varied projects have been exhibited extensively and internationally. We featured an image from his project Islay as Centrefold in issue 9. In this interview we discuss the intricacies behind that project, where he pulls his inspiration from, and his advice for emerging photographers.

Lucas Birtles: Your recent project Islay has been in development for twenty years – can you tell us about the project’s journey and how it reached its conclusion?

Rory Carnegie: During my postgraduate studies I was influenced by the methods used by anthropologist Clifford Geertz. He espoused the idea of ‘deep hanging out’, which is exactly as it reads: spend time and absorb a place and its culture. I started visiting the island in 1998, and have recently begun spending more and more time there. I’ve been making photographs since I first visited, but I started putting the work together in this form only in the last few years.

I am not sure if the work has reached its conclusion. I’m still experimenting with the ways in which the work will be presented beyond its digital showing.

LB: When creating your imagery, you begin with a black and white landscape but then ‘encode’ them with further images. Can you tell us a little more about your process of encoding? How do you select the specific images to accompany the landscape?

RC: The work is made by compositing black and white landscape images with colour images that have been ‘encoded’. These ‘encoded’ images show some aspect of Islay life.

My daughter, Cloudy, helped me with the encoding process. At the time she was completing her PHD in Physics, for which she was required to write code. Together (though mostly her) we developed a series of mathematical operations that modified the original function (the original Islay life image) with a grid-like shape to produce a convolution of the two, the encoded image. This was repeated multiple times. The effect of these operations is akin to passing an image through a set of structural filters.

The images that were chosen to accompany the landscape were selected both by what they represented and by their colour and tonal values.

LB: Your recent project Invisible People, about slavery within the UK, creates a raw atmosphere which is both evocative and informative, a stark contrast to Islay, which seems to have a more contemplative feel. How do you separate a hard-hitting journalistic style from a more introspective one?

RC: The Islay work has historic aspects but it’s not intended to be sentimental.

I was hoping to elicit very different responses to those two bodies of work. Invisible People was shown throughout the UK as large illuminated cubes placed in busy public areas, such as shopping centres. I wanted people to become aware of the insidious nature of modern slavery, and to show the horror, without making people afraid to come and investigate further. It has been successful in that several people have been rescued from slavery as a result of the work, there is now more of a conversation on the subject and there have been several million engagements regarding the work in social media.

When looking at the Islay work, I don’t feel particularly prescriptive about people’s responses but hope that people might consider the interconnections that make up our existence.

The project that I am working on at the moment that involves working with a homeless charity sits somewhere between the Islay work and the Invisible People series in that it addresses a very real social problem in a more conceptual manner.

LB: It’s fantastic to hear Invisible People has had such a large engagement and response. Much of your work focuses on social issues or hidden worlds within our own, take Asylum, Russia, and Ring Road for example. How important is photography in exploring and tackling social issues, and why are you compelled to explore these ideas through photography?

RC: I’ll answer the questions back to front…

If there is a thread running throughout my work, it is looking at that place of tension between the shapes we, and other sentient beings, take on as the world acts upon us and the ideas of order that, in response, our imagination imposes upon the world.

That tension is greater in places where people’s capacity to respond imaginatively seems compromised and they appear without agency. For a whole host of reasons, I am drawn to work in these areas where these vulnerabilities exist.

A look at the history of our craft has shown that photographs can play a part in influencing attitudes and behaviour regarding those social issues.

The last few projects that I have worked on have been collaborative, which has been good, but I suppose I have a particular skillset is with a camera.

LB: You’ve successfully covered many topics throughout your career. What advice would you pass on to emerging photographers regarding how they might keep their photography relevant in pursuit of a fulfilling career?

RC: Photography is very instinctive and reactive. Sometimes you don’t know why you have taken a photograph; sometimes it feels emotionally right, but you are not sure of the rational or intellectual motivation. Give yourself and the work time for those connections to become apparent. It might take somebody else’s observation or your own reflection, but when you have that understanding, you can build.

LB: Thank-you for the sound advice, and good luck with your future projects.

Issue 9 of Loupe has arrived at our stockists! Make sure you pick one up free before they run out, or order from our online store if you can’t make it a stockist.

Lucas Birtles is a Bristol based photographer, writer, and poet, currently studying at the University of West of England. You can find his work at www.lucasbirtles.com and www.thequietproject.com