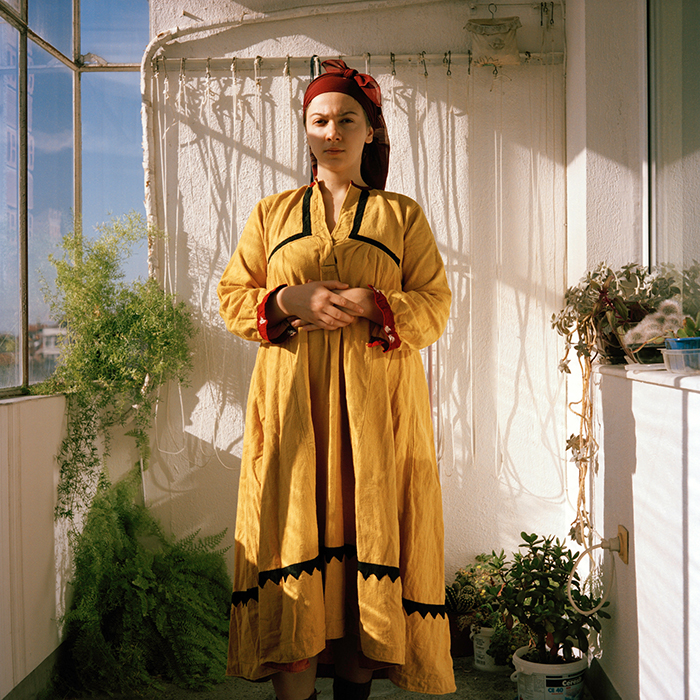 National Identity: With the Name of a Flower

Vera Hadzhiyska is a Bulgarian artist and curator based in the uk, she has recently completed her studies at the University of Portsmouth. Her introspective multi-disciplinary works examine cultural history, national identity and collective memory. Vera has been published in the Calvert Journal, Post Pravda Magazine, Bulgarian Photography Now, Photograd and Source Magazine. ‘With the Name of a Flower’ is her latest project, which has been exhibited across Europe.

Luke Das interviewed her about With the Name of a Flower, her feelings surrounding the personal topic and plans for the project.

Luke Das – May I ask if you regard yourself to be ‘British’ or ‘Bulgarian’ and how does this impact the works that you create?

Vera Hadzhiyska – I identify as ‘Bulgarian’ and I think that’s evident from my work. I moved to England five years ago to pursue my education and career in photography. I feel a sense of belonging to the community here but I don’t think I’ve spent enough time in England to feel ‘British’. Either way, migrating here had a huge impact on my practice. My sense of belonging was shaken – I was a foreigner in England and also becoming a foreigner in my home country the longer I was away. I think those emotions and migrant experiences were the spark of my artistic practice. LD – You have travelled extensively. May I ask how ‘With the Name of a Flower’ has been received in the UK, Bulgaria and further afield?

VH – “With the Name of a Flower” shines a light on the name changes imposed on Muslim people in Bulgaria from 1912 until 1989 (people were required to change their Muslim birth names to new Bulgarian state-approved names). I focused more specifically on the name changes that took place during the 1970s (under communist rule) as my family were affected by them. My work explores the collective experience of this past trauma through a personal / family narrative. The project is socially and politically charged, focusing on the impact of these forced name-changes on people’s lives, sense of belonging and identity through generations.

The first time I exhibited ‘With the Name of a Flower’ was in London last year in a solo show as part of my Master’s degree. It was later shown in Plovdiv, Bulgaria as part of the Night / Plovdiv festival and more recently in Paris as part of Circulation(s) festival (open until 26 July 2020).

When I exhibited the work, I was aware that not many people would know this history (especially outside of Bulgaria) so it was important to me to provide enough historical context and information so the audience could understand the work. The publication “With the Name of a Flower”, which accompanied the exhibitions, includes several articles, one of which is a short history of the name-changing campaigns written by Bulgarian historian Evgenia Ivanova.

In London there were many visitors from Eastern Europe – Czech Republic, Slovakia, Romania, Bulgaria and Poland. The response from the public to the work was amazing. Everyone that attended was genuinely interested to know more about the history (both the stories of my family and the Bulgarian history they related to). Visitors were sharing their own family histories and experiences of trauma, shifting identity and migration. I was so happy because people engaged with the project on a deeper level.

I was blown away by the response of people in Bulgaria. Nearly a thousand people visited the exhibition during the three nights of the festival. Many of the people who came already knew a bit about the name changes in Bulgaria, either from personal experiences or through friends and acquaintances who were affected by it. Others, especially younger people, were finding out about it for the first time (as this part of Bulgarian history is not taught in schools). It was an amazing experience for me because I got to speak to so many people about their memories, experiences and opinions about the name changes. LD – You studied at the University of Portsmouth. Do you feel an undergraduate and postgraduate education is needed to practice as a photographic artist?

VH – It is not necessarily needed; however, it does help a lot in terms of networking, connections to the art world, resources and opportunities. Being in education puts you in a creative environment where your sole purpose is to make work and it provides you with structural support from tutors and peers. I personally found it transformative – it completely changed my ideas about photography. LD – ‘With the Name of a Flower’ is a substantial cross discipline piece. You mention interviewing your own family on your website. Was this the starting point for your research?

VH – I first began interviewing my relatives for ‘Kingdom of Chamla’, which focused on the migration of my family from small mountain villages to larger cities in Bulgaria and abroad (a migration pattern seen in many Bulgarian families). However, exhibiting the work and talking to the visitors about the stories behind it made me realise that there were gaps in my knowledge. I felt I had just scratched the surface and I needed to dig deeper.

When I started my Master’s, I went back to interview my grandparents and find out more about their lives. My relatives would casually mention that they had different names before and that made me pause. I was shocked when I found out that a huge part of the Bulgarian population was forced to change their names just because they were Muslim. It made no sense to me and I wanted to find out why this happened. That’s where my research crossed from personal family history to Bulgarian history. I wanted to connect the two and find out the socio-political reasons behind what happened. LD – What is it about photography specifically that appeals to you?

VH – I see photography as one of the tools that helps me to tell stories, raise awareness about topical issues and engage with people in meaningful discourse. Over the years my understanding of photography has changed a lot. Back in school, it was a way to capture my reality and everyday life. At university, that idea shifted and photography became a means to share my own and other people’s stories – it questioned notions of identity and belonging. I used to define myself as a ‘photographer’ but over the past few years my perception has changed and I see myself more as a ‘multi-disciplinary artist’. LD – How readily available was access to the archives that you needed and how did you feel after unravelling the truths of the name changes?

VH – My issue with the archives was that I would travel to Bulgaria for only weeks at a time and I found it really difficult to access the materials I wanted. I would not only be going to the state archives but also interviewing relatives, photographing them and making video recordings then looking for old family photographs and documents. The other difficulty came from the fact that the history of the name changes spans roughly between 1912-1989 and links even further back to the Ottoman rule over Bulgaria, so I had to narrow down my search significantly.

I did find it emotional discovering documents relating to my family members. I found a collection of request forms for name changes from the 1970s and among them was the form, which my grandfather filled for his family. It was extremely surreal. It made it even more evident that our personal lives are forever affected by political and cultural circumstances. A name change request form, 1970s. Courtesy of State Archive – Smolyan, Bulgaria (2019) From ‘The Name of a Flower’ ©Vera Hadzhiyska

LD – Do you have a follow up project planned?

VH – While working on ‘With the Name of a Flower’ I accumulated a lot of research and visual material that didn’t make it into the final project. I am currently working on a photobook diving further into the memories and experiences of individuals and sharing their diverse narratives. As everything is personal, some of the people I photographed want to remain anonymous, so I’m trying to figure out how I can tell people’s stories while also protecting their privacy.

Ideally, I would like to create a book that traces my family tree and follows each branch to give a glimpse of the experiences of different people during the same overarching events. It would be about the name changes but also the forced migrations and life in these circumstances. I would probably want to keep work of this nature to myself and it would feel too personal to share with the public so I’m trying to navigate that dynamic. All of this is still in the very early stages of development. If any designers are interested to work with me on this, give me a shout. I would love to collaborate. Page from the Name Change Notebook, 1970s, archival document courtesy of State Archive – Smolyan (2019) From ‘The Name of a Flower’ ©Vera Hadzhiyska

LD – In the wake of the coronavirus pandemic, what role has photography had to play in the documentation of the disruption to ‘normal’ life?

VH – Photography has always played an important role in documenting disruptions to what is considered ‘normal’, be it socially, politically, environmentally or in any other sense. It has been instrumental in portraying the unique situation we are experiencing collectively at the moment. The pandemic has affected everyone in unique ways and I think photography has allowed us to share our realities with the rest of the world. It has also changed the way people approach photography in many ways (especially when it involves other people).

With the Name of a Flower is currently exhibited at Circulation(s) Festival in Paris, which will be reopening from 5 June until 26 July 2020

Issue 10 is out now. You can pick up a free copy from one of over 90 stockists across the country. Single copies, back issues and annual subscriptions are also available to purchase from our online store.

Luke Das is a lecturer, writer and photographer with an interest in traditional image making techniques. His works pay homage to photography from the past and present.