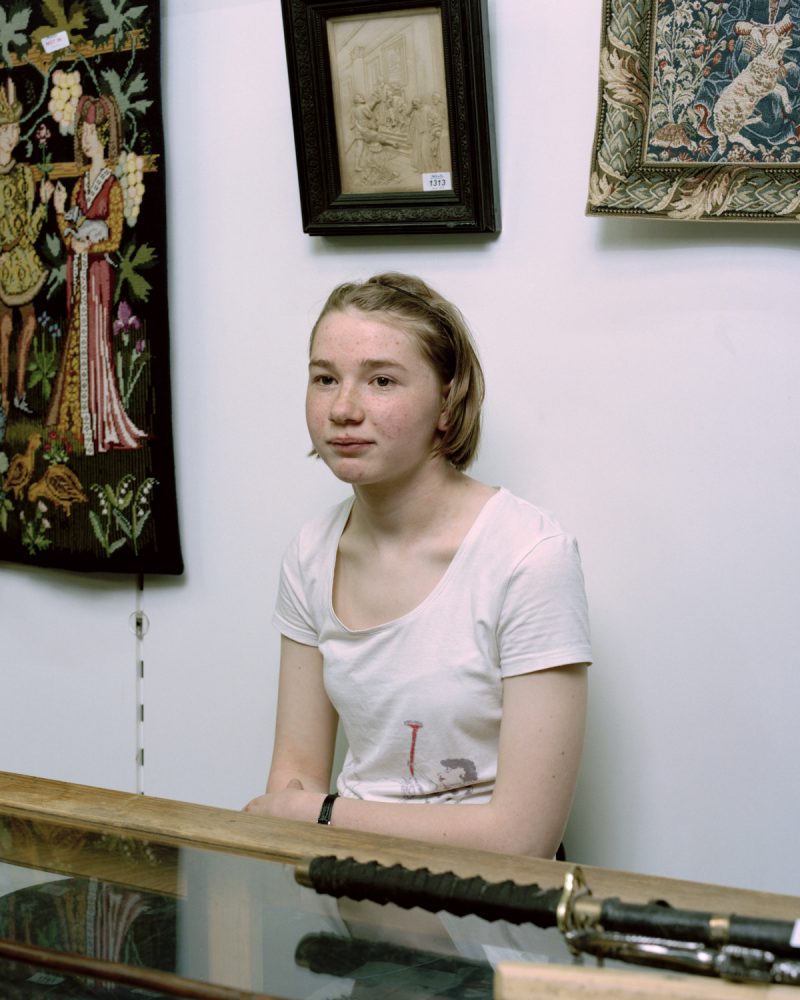 Joseph Horton’s most recent ongoing project Terrain Vague focuses on the road which joins England and Wales, whilst forming an unofficial border between rural and industrial South Wales. It aims to portray the ever-changing British countryside, exploring the ambiguity of its meaning and the complexity of its definition. The project focuses on a space that arises many questions and involves presenting the unfamiliar in the familiar, creating narratives through constructed landscapes.

Maria Giorgia Lenzi interviewed him about Terrain Vague, the process behind it, his inspirations and creative education.

Giorgia Lenzi: Your recent ongoing project Terrain Vague (2019) can be defined as an investigation of national identity, exploring a complex semi-rural and post-industrial area of Britain, its border lands and coexisting realities. What were your motives behind this project?

Joseph Horton: I wanted to produce a document that pictured the reality of the British countryside, that was what I said to myself at the start of the project. I’d grown up on a small farm on the East end of the road that joins England and Wales, which became the main focus during the project, and I travelled its length a lot as a teenager when I first learnt to drive. After I’d lived in London for five years, I felt that that other part of my life did not seem to connect, and I wondered why. It seemed that many, the majority even, viewed the countryside as a space of leisure and beauty, which it can be, but I found that the complexity I know of it just wasn’t communicated. I began looking a lot at the iconography of rurality; Stubbs, Gainsborough, Constable, for example. These men which proliferated the myth of the idyll during the Romantic period. This fuelled my curiosity of what it meant to imagine the countryside and what was included in the parameters of the word ‘rural’. So I set out to unpick this narrative with the objective to not try to constrain or limit my interpretation and to me the area in question did just that, within 65 miles of road I traversed both pastoral and urban scenes that quickly blended together. GL: Tell us a bit about your process. Did you plan ahead following a mapping method and finding your subjects upfront or were the images the result of more spontaneous wanderings?

JH: I spent a while trying to work out my parameters for this project as it was not about describing a certain specific location as much, in the sense that I wasn’t trying to tell a fixed narrative of this place here looks like this, but I did want to keep it to an area which I felt best talked about the themes in question. In order to focus my attention, I decided that I would drive up and down the main road, the A465, and travel either side of up to 5 miles or so (an arbitrary number in order to not go crazy with endless options). Once I had that in mind, I would then choose certain sections to visit on day trips, drive up that section and look for areas of interest and then walk around for a bit. I knew parts of the area from my trips as a teenager, but I also used OS maps a lot and would park in lay-bys and walk the areas surrounding them. Through that I was then able to look for images which I might have seen previously but also be free to photography whatever I came across.

GL: What were the challenges, if any, that you faced in the making of Terrain Vague?

JH: I really struggled with the lack of structure to the project at the start, I didn’t really know exactly what I wanted to produce or how it would look. It was difficult to remain confident in the knowledge that what I was interested in could also be visualised, and I think that is something that is still being developed in the work. Being on the MA course with a limited timeframe sometimes was an added stress to an evolving body of work that is both led by research and imagery. So it was a challenge to prescribe that to a constructed timetable given by the university, however that also really helped to keep pushing through those uncertain days when you feel you’ve lost direction.

GL: As it resonates in the title of the project, the in-between state of the space portrayed generates an intrinsic vagueness that seems to become part of the story. How does this ambiguity translate in your narrative and what ideas guided you in the combination of landscapes and portraiture?

JH: I never really wanted to structure this work in a way which felt overly defined, as the intention was to try and capture the interweaving and messy nature of elements that go toward defining the British countryside. I find that when art is brought too closely alongside fixed narratives there is little room for interpretation and that can end up limiting its meaning. Because of that, in the beginning I wanted the process to be exploratory and to be led by the images. To build narrative in the work I looked for images which presented the unfamiliar in the familiar and that had a flexibility which lent themselves to metaphor, this became a way to start making suggestions of how we categories an environment. Following this, I wanted to make sure that I didn’t lose connection with it as a living environment and people were really key to this. For example, the way we dress is very connected to the place we live in and by showing people and place together it increases the narrative about landscape being both a social and material space. GL: If you could determine the viewer’s approach to the project, what would you want this work to communicate or suggest?

JH: I would be really pleased if this work contributed to the way in which we think about the environment and landscape around us and how that connects to our perception of national identity. The UK has seen a huge development in political and cultural thinking, even within the last decade, and a lot of what we hold onto as our national ‘Myth’ just isn’t true anymore. We have less and less people living in rural communities and this exodus is leading to a city centric point of view. Because of that I hope, as this work continues, that I can add more to the narrative and develop the picture of how we live in modern Britain. Photography as a medium is really good at reflective documentation and for me this work sits in that genre, I’d like for it to make people sit and contemplate ‘what am I looking at and why does it matter?’. GL: Who do you consider an important source of inspiration for this project or for your photographic practice in general?

JH: There are a lot of photographers I’d like to mention but I’ll start with some of the books that really opened up my eyes to the elasticity of the term ‘landscape’. For example, I was reading a lot about the anthropology of landscape in quite known books such as Marc Auge’s Non-places, introduction to an anthropology of super modernity but also a book called Anthropology of Landscape – The Extraordinary in the Ordinary. I’d like to add a quote from that below:

“People make of it what they will; indeed conflict is a vital part of what landscapes are and in a very real sense this gives landscapes their vitality and makes them into a living presence, something that matters, and gives them dynamism and emotional presence and value in people’s lives. A harmonious landscape would be one that is socially dead, meaningless and irrelevant: conflict both engages and empowers in profound ways.”

These texts enabled me to put a structure to my thinking and house it in a way that gave credit to it, ultimately helping me to understand the multiple elements that I wanted to bring together. Photographically, I have a real fascination with the birth of modern ‘documentary’ in America and people who have pushed that term into a cultural critique. Stephen Shore, Alec Soth and also Joel Sternfelds’ book Stranger passing, which I bought recently but really wish I’d found at the start of this project. I was also looking at Wolfgang Tillmans work a lot, not so much for aesthetic comparison, but more for how he looks for metaphor and identity in a photograph. And finally, I’d like to mention Robert Adams and his book Listening to the River. GL: Having recently completed your MA in photography, what would you say was a valued benefit resulting from creative education?

JH: I think the biggest benefit from creative education is time. It’s easy to not give yourself enough time for looking and thinking around a subject and it takes a lot to really absorb an idea, well for me anyway. The MA was really good for that, I don’t think I would have created this body of work without it. By giving me the time, it also helped me in understanding the process of making a project, how to research and how to bring all of it together. It forces you to ask questions and be critical about why, a word which can drive you to insanity. GL: Looking forward at your future in photography, could you share any resolutions or plans on your mind?

JH: Well, to acknowledge the elephant in the room, I’d say it’s a very strange time to be looking forward as a graduate. But my plan is to carry on with the project as and when it is possible, there’s still an itch to scratch and I have some more images which I feel will help solidify the narrative and bring the work together. I’ll also be making it into a book dummy with the possibility of self-publishing, the images really work best in that form so it’s definitely on my list. Alongside this, I’ve started researching some new projects in areas which have been stirring in my mind, but so far nothing concrete. I’ve learnt a lot during this project and the MA, so I’ve got some research going on for these new ideas. I’d say that has been the biggest help in moving forward during this crisis, it has given me some focus and structure back to my days. Loupe National Identity Issue 10. You can pick up a free copy from one of over 90 stockists across the country. Single copies, back issues and annual subscriptions are also available to purchase from our online store.